HOLIDAYMAKERS were plunged into further chaos today after being hit with eight hour flight delays and hundreds of trips scrapped over text.

Passengers compared Bristol Airport to a “zoo” this weekend while those in Manchester reportedly waited four hours for a pilot to show up.

Passengers said they endured a second day of chaos at major UK airports with travellers in Bristol complaining about delays and staffing issues.

One holidaymaker tweeted: “Holiday cancelled after arriving at Bristol airport this morning, then after spending over an hour on hold I finally get through to @TUIUK only to be cut off.”

Another wrote: “Arrived at Bristol airport at 11AM for our 2PM flight to Gran Canaria to find out it has been delayed for seven hours. Not scheduled to leave until 20.55.”

Someone else said: “Bristol Zoo, sorry airport, was the same for the Mrs on Friday. She made her flight only because it was delayed. 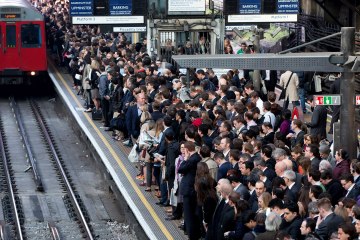 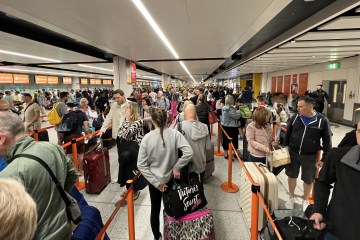 “Try employing more people, even on a temporary basis to cover the holidays.”

A fourth wrote: “Thanks for the incompetent staffing, a six hour delay absolutely atrocious service #bristolairport surprised the airlines use your airport.”

Others said their holidays were scrapped altogether, with hundreds of customers left in the lurch.

Some Brits told how they were forced to abandon their bags after they failed to show up in arrivals.

Dawn Brian, from Stoke-on-trent, landed in Manchester at around 9.50pm on Saturday night from Palma de Menorca.

“We were already worrying about what we were going to encounter when we landed but it was just utter chaos,” Dawn told Manchester Evening News.

She added: “We were waiting for our luggage for two hours and the belt on the carousel hadn’t even moved at all. It was horrendous.

“There were bags everywhere that had just been left abandoned from other flights.

“Someone said their house keys were in there and they couldn’t get into their house without them.”

We were waiting for our luggage for two hours and the belt on the carousel hadn’t even moved at all. It was horrendous

Vicki Bowdler, from Westhoughton in Bolton, arrived at Manchester Airport at 10pm on Saturday after being on holiday in Menorca with her eight-year-old daughter.

“Our flight was luckily only delayed by an hour but we then had to wait onboard at Manchester because there was no air bridge available for us,” she said.

“We were told we would have a 30 minute wait for our luggage but every time everyone asked, it was always 30 minutes.

“We waited three hours until we were told at around 2am that we would have to fill out a form and go home.”

Duncan Smith was on board the same flight as Vicki and said he was informed there were no staff available to offload their bags until the morning shift started.

“We were told there were no staff to recover our bags but a TUI flight from Gran Canaria landed at 01:56am and the bags were processed without delay onto the carousel we were waiting at,” he said.

He slammed: “Turns out they did have staff in but chose to leave our baggage stranded whilst other flights arriving several hours later were processed.”

It comes after EasyJet announced it would cancel more than 200 flights from Gatwick over the next ten days, while Tui dished another blow with a “small number” scrapped from Gatwick, Birmingham and Manchester.

EasyJet said its cancellations would affect about 24 flights per day from London’s Gatwick airport between May 28 and June 6.

Meanwhile, Tui said “various operational and supply chain issues” were to blame for their flights being axed.

On Saturday, some Tui customers were forced to wait four hours for a pilot to show up for a flight from Manchester to Kos – something the company has since apologised for.

Others in Bristol reported being stranded in the airport from 1pm to 9pm, only to have their flight cancelled by email, Bristol Live reports.

It comes after 200 flights were cancelled on Thursday due to an IT glitch.

Many passengers fumed they were stranded abroad due to the chaos.

Some also lost thousands of pounds after being forced to cancel their holidays or book onto other flights.

At Gatwick, Bristol and Manchester airports – the worst-affected by the cancellations – huge queues stretched back as Brits battled to travel abroad.

Of the latest cancellations, an easyJet spokeswoman said: “We have taken the decision to make advance cancellations of around 24 Gatwick flights per day starting from tomorrow 28 May until 6 June.

“We are very sorry for the late notice of some of these cancellations and inconvenience caused for customers booked on these flights, however we believe this is necessary to provide reliable services over this busy period.

“Customers are being informed from today (Friday) and provided with the option to rebook their flight or receive a refund and can apply for compensation in line with regulations.”

A spokesperson for Tui also apologised.

“Delays have been caused due to a combination of factors,” they said, “and we are doing everything we can to keep customers updated.”

They added today: “We would like to thank customers at Manchester airport today for their patience and understanding at this exceptionally busy time.

“We are continuously working with airport staff to ensure a smooth running of operations on the ground.”

The company has also apologised for the inconvenience to customers on Saturday’s TOM2680 from Manchester and Kos, which was “delayed due to a combination of factors causing significant operational disruption”.

It said customers will receive a full refund.

“We contacted affected customers as soon as we became aware of the change and all customers will receive a full refund within 14 days.”

Manchester Airport today said they are aware of “challenges being faced by a number of airlines” which “is leading to delays at check-in and baggage reclaim for some passengers”.

They insisted this is “not the experience we want passengers to have” but explained: “Airlines and their ground handlers are responsible for their own check-in and baggage handling services.”

They added: “Passengers are advised to direct any questions or concerns about these issues, or anything relating to their flight, to their airline, who will be best placed to respond.”

Bristol Airport said today’s delays were down to a Jet2 flight.

Jet2 said they were “aware that this particular flight was delayed”, and added “we would like to apologise to any affected customers”.

A spokesperson for Swissport who manage baggage at Manchester Airport said: “Half-term is always a busy time for airports and we know that they, as well as our airline partners, are currently experiencing a number of challenges which often have a knock-on effect on our work, exacerbating existing capacity challenges.

“We understand how frustrating delays are for passengers so our staff will always try as hard as they can to find a solution.

“We will continue to collaborate with airports, airlines and other baggage handlers to minimise disruption wherever we can.”

The latest chaos comes after Brits were urged to check travel advice before heading to the port of Dover this week.

The Department for Transport warned roads in Kent are “extremely busy” due to an “exceptionally high number” of travellers.

Hoteliers, here are some 2023 travel predictions

Impact of Inflation on the Hospitality Industry in UK