Aliyah Boston’s guiding force has always been her faith.

It’s a faith her parents instilled in her as a young girl growing up in Saint Thomas, in the U.S. Virgin Islands. It’s a faith that guided her as she moved to live with her aunt in Massachusetts, honed her basketball skills and landed at South Carolina, eventually becoming an integral part of the Gamecocks’ success over the past three years. It’s a faith she relied on a year ago when the Gamecocks lost by a single point in the Final Four, falling just short in their quest for a second national championship.

And it’s the same faith that’s been tested and strengthened over the past year and has brought her to this point: the front-runner for Naismith College National Player of the Year, one of four finalists for the 2022 defensive player of the year — her second time in as many seasons as a finalist — and, most importantly, on the cusp of finally bringing home that coveted national title.

“I have definitely grown in my faith since last year,” Boston told me. “When COVID first started, I didn’t know what was happening in life and I was feeling overwhelmed a lot, but leaning on my faith has helped me.

“My family, we do a family Bible study almost every night, and I feel like I have been able to grow and get closer to God in that way as well. My faith helps me on the court because I am more patient, and I know God has already equipped our team with victory. And if anything happens I don’t think should have happened, I just know it’s because of him.”

What has happened that she credits to her faith is the success she’s enjoyed this year. The 6-foot-5 junior forward has been the most dominant women’s basketball player this year, putting together an eye-opening, historic season. She has permanently etched her name in the Gamecock record book.

Boston has notched 24 consecutive double-doubles, the longest active streak in the nation and the longest streak in SEC history. She leads her team in points, rebounds and blocks per game, while also tallying 1.9 assists per game and shooting 54.4 percent from the field. Her rebounding and blocks average rank eighth and 11th in the nation, respectively, and her astounding 13.9 win shares lead all players. 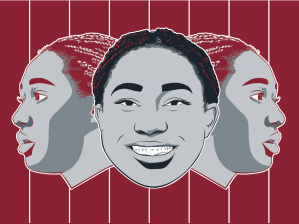 To hear Gamecocks program officials tell it, Boston has elevated the entire team. Her communication and ability to defend beyond the paint have helped the Gamecocks lead the nation in opponent field goal percentage (33 percent) and rank fourth in scoring defense (51.7 points per game).

Boston said she hadn’t been focused on trying to make or break records. “I think it just happened organically,” she said. “Coming into the season, my goal was just to win. And so I was just trying to do everything I could to help us do that. Everything else was the result of that.”

The player with the wide smile and iconic multi-colored braids is the head of the snake that is South Carolina. The Gamecocks have been No. 1 for much of the season and have lost only two games, including an upset in the SEC Championship game at the hands of seventh-seeded Kentucky. But even in the loss, Boston led the team with 21 points and 11 rebounds — her 24th consecutive double-double. It was a feat not surprising to her coach, Dawn Staley, who has left no doubt who the national player of the year is in her eyes.

“Aliyah, she’s performed as the best college player this particular year,” Staley told me. “Double-doubles, being double-teamed and tripled-teamed, and being the target of our team night in and night out and still being able to perform as she does at an efficient clip.

“I mean, she’s a generational player. I don’t think we talk about her enough in those terms. But she is if you look at where she started to where she is now. I think any team in the country would want her on their team.”

Boston recognizes the tremendous season she is having, and she once again points to her deep faith as the root.

“First off, it’s all because of God. He has allowed me to have this, and he’s blessed me with great teammates that have allowed me to shine on this stage,” she said. “Every day I wake up and I am locked in to everything that we are doing. No matter who we are playing, I focus on that and how I can get better as a player.”

Boston said she was relying on her family, friends and teammates to help her in her quest to become better. “Everyone that I have crossed paths with this entire year, especially my family, have been the best for me. They always push and motivate me and help me to be a better person on and off the court.”

Boston hears the chatter about national player of the year and acknowledges that winning it would be special. “I’ve been working really hard so it would mean a lot to receive the award,” she said, “but we need to keep the main thing the main thing.”

And the main thing for Boston is finishing the journey to a national championship and cutting down the nets in Minneapolis.

It’s a journey that was interrupted last season when South Carolina fell behind by a point to Stanford with 32 seconds remaining in their Final Four matchup. Brea Beal missed a layup for the Gamecocks, then Boston missed a putback attempt. Time expired, and the Gamecocks fell to the Cardinal, 65-66. Stanford would go on to beat Arizona in the championship game.

Boston walked off the court after the loss with her eyes overflowing. She said she’d gone back to the hotel and started packing her bags and watching games on television, all the while mentally telling herself it was going to be OK.

“I’m not really sure what thoughts were going through my head,” she said, reflecting on the moment, “but I remember a lot of text messages saying it’s going to be fine, we’re going to come back next year and encouraging me to just be strong.”

The loss stayed with Boston for a while. Determined to get better in every way, the two-time winner of the Lisa Leslie Center of the Year Award — given to the best center in women’s basketball — spent the summer working on her overall fitness and, as she put it, “making sure that I am ready to run at the pace we’ll need.”

“I worked on my outside game, jump shot and just being more aggressive,” she said. “My want to just be better, aggressive, on and off the court is huge. I want to see myself grow.”

The disappointing finish was still on her mind a few months later when this season began, but she eventually let it go to focus on the new. “I think it fueled me for a while, but also coming into this season, I just let go of that just because it was a brand new season with different games ahead.

“I can’t really focus on what happened in the past. I can’t go back and change it. So I put it on the backburner and focused on what’s ahead in the season.”

Now, 12 months later, Boston and the Gamecocks have shaken off the lingering disappointment from last season and have made it back to the tournament, one of 68 invitees. They’ll have to travel through a winding road to land back in the Final Four, with their eyes fixed on the championship.

In their 18th NCAA Tournament, South Carolina enters this week’s action as the No. 1 overall seed and the top seed in the Greensboro Region. The Gamecocks are hosting their opening-weekend game, and they’ll play Friday at 2 p.m. Eastern against No. 16 seed Howard — the winner of a First Four game against Incarnate Word — at Colonial Life Arena.

As tipoff approaches, Boston is once again laser-focused and is cutting out all the noise; she got a boost on that front from a name, image and likeness deal with Bose announced Monday. Boston, along with Gonzaga’s Chet Holmgren and Duke’s Wendell Moore, were chosen by Bose to represent their new noise-canceling headphones.

Boston tweeted a video of herself wearing the headphones and detailing how her team planned to block out the noise on their journey through the tournament:

Boston knows all ears and eyes will be on her as the tournament starts — including those of her parents, who will be here for the March Madness ride. But as she’s shown ever since arriving at South Carolina, no spotlight is too bright.

She’s about making history and making memories. And with her faith as her guide, she has a specific memory in her sights.

“I would say winning the national championship is the best memory I could ever have.”

How to Pack a Suitcase: The 53 Ultimate Hacks